When I was a kid, growing up in Verona and attending the local Italian school, Thanksgiving was just another Thursday for my classmates. But for my brother Stephen and me it was special. We would race home after school in the cold November fog, climbing the marble stairs of our old apartment building two at a time, into a house already full of delicious smells from my mother's cooking. My two great aunts, Josie and Milly, would be cheerfully setting the table and helping out on what was indisputably their favorite holiday of the year. My uncle Brother (that's what my Mom called him so that's what we ended up calling him) would be there, having just arrived by train for the long weekend and there would be the usual discussion about whether it made any sense to cook lasagna since there was already so much food. "We won't enjoy the turkey." "Oh, we definitely will," Josie and Milly would reassure everybody. They were very much pro pasta regardless of what food the occasion might warrant. Milly had once confided in me, on one of my visits home from college, that my mother was getting away with murder (she had my full attention until I realized she was referring to the fact that my mother no longer cooked first and second course meals but just one or the other, and sometimes skipped pasta altogether).
Before Josie and Milly moved in with us (allegedly just for Christmas as my father was quick to point out), they lived with Uncle Brother. But things didn't go quite so smoothly. And they definitely came to a head on the Thanksgiving he woke up to discover that at 10 am they had already eaten the entire dinner without him. "Don't worry," they reassured him, "We'll eat a second dinner with you later." In fairness, they did wake up early. Like 4:00 am early. Milly used to take Penny out for a walk at that hour (Penny was a doberman pincher) occasionally shocking the neighbors who were certainly not expecting a doberman to come bounding down the stairs just as they were coming home from a late night out.
Sometimes, we invited an Italian friend over for Thanksgiving. An interesting cultural exchange often ensued, as the guest politely noted: "Corn on the cob? Interesting. We usually give that to livestock. And this is pumpkin pie? I guess you need an acquired taste for that. Root beer? Smells like the medicine my grandmother uses for back pain."
As I make my very first pecan pie today, with kids of my own about to come home from school (and probably marvel at the fact that I have made a pie from scratch and not just bought one from a shop), I think of Josie and Milly. And wish I could share it with them. Perhaps, with some whipped cream or a scoop of vanilla ice cream. Or the way they liked it served best, after a pasta dish.

* Yes, you can get pecans in Singapore. In fact, since it rained all day yesterday, I had all necessary ingredients delivered by this wonderful family owned local grocery I just discovered http://www.kennygroceryonline.com/.
Posted by Jennifer 5 comments: 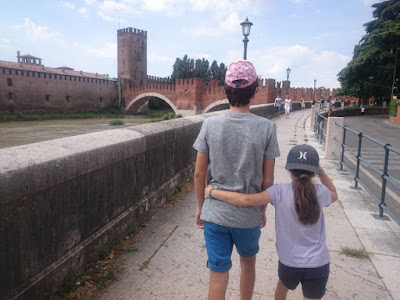 My son says he doesn't want me to come to his swim meet this Saturday. "Absolutely not." On the one hand, this means not spending 7 hours (at the very least) on a bleacher in the Singapore sun, on the other hand, this is my fourteen year old who doesn't need me to watch him any longer. That can't be right. Is this the same kid who used to ask me to watch him play in the playground? I remember that clearly because I really wanted to read my book. "I'm going to play but you have to watch me, ok?" Or the little boy who used to sit on my lap while we watched The Jungle Book every single day after preschool? Surely not the same child who used to ask to hold my hair scrunchie, when we were visiting my parents and I had to momentarily leave the room, "So I know you will come back." I did have an unhealthy attachment to my scrunchie, the boy was observant like that.
Today parents were invited to attend an art class at my daughter's school. It's her last period, so naturally I assume she will ditch the school bus afterwards and just come home with me. But no, I am wrong. "I'm going to take the school bus home, is that ok?" Of course, it is ok. It's better than ok because this is the single thing I was most worried about when she started this new school: the 40 minute school bus ride. In fact, this is really great news. And it's also wonderful that my son is confident and independent enough to go to swim meets on his own now. But there's something else I can't put my finger on. Somewhere, deep down it also hurts a little. I guess that's what being a parent is about: being happy, even when it hurts a little.
Posted by Jennifer 7 comments:

Musings of a Ten Year Old


Yesterday morning at the US embassy, as we hand over all our phones, watches, and bags to the security guards, Eliot asks: "Are we being robbed?"

"Was that a good cartwheel? Don't tell me as a Mom, just as a normal person."

"Mom, this is the best dinner I ever had... but that could also be because I am starving."

"Now I'm as tall as Alexander is when he's sitting down."

"Mom, we're building a parkour course in the living room."

Climbing Mount Everest, swimming across the English channel, running the Boston marathon... "What about being a movie star and having your name in lights on your door, Alexander?...Is that also on your budget list?"

"If we were both in heaven, could I find you?"

"Does Santa Claus come when you're in college? " Yes Eliot, it's called tuition.


Posted by Jennifer No comments: